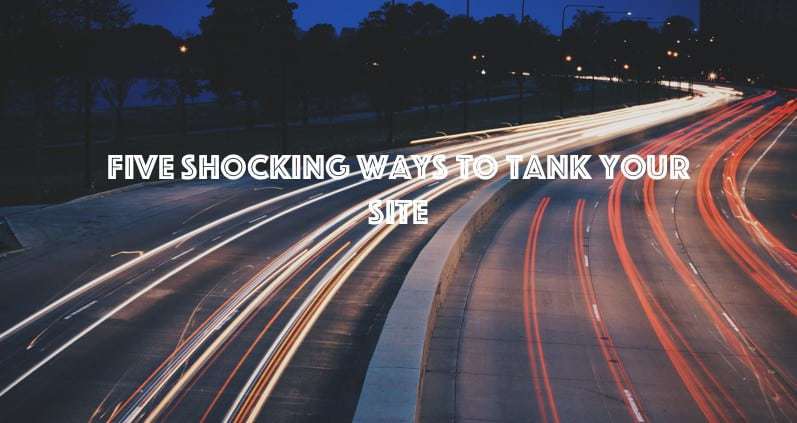 Running a site can both be a joy and a pain. Especially if you need to maintain and update the site that runs on a hard to update software. Or perhaps one which was badly coded and maintained. At times, it makes more sense to transition to a different software rather than try to extend it. But it is in switching where most people make mistakes on.

In recent weeks, I’ve helped some friends troubleshoot errors within their pricey new websites. Unfortunately, these findings came a bit late as the websites were delivered to them. However, I’ve written this article in hopes that you won’t do the same and tank your site as well. Read on as we explore the topic further.

For most people, switching to a better site is a dream they look forward to. Especially when they’re on an older site with fewer capabilities. But switching sites is a potential pitfall that causes your site traffic to suddenly dry up. If your site is your primary source of income, or worse, the source of income for your company, you need to beware of issues plaguing most site owners.

If you were previously on say, OS Commerce, Drupal or perhaps some custom-built Laravel site, switching to say, WordPress, Magento or Shopify isn’t as easy as just uploading the products again. While you might be using the same domain, you might still lose your previous permalinks.

This causes an issue with Google Search Engine, as it will return with 404 error each time your permalink changes without a proper redirect. Have too many of this and your traffic will suddenly tank. As such, your developer also needs to be skilled in the art of SEO. As he/she needs to take stock of all existing permalinks and make sure that your new site gets the link juice from  your previous permalinks.

2) Best Ways To Tank Your Site : Use Outdated Software

In a recent case, I was talking to a friend online when I discovered that their site was on the earlier version of Drupal. And a few clicks later, I discovered they were freshly hacked. The problem was the website just launched two months earlier, using Drupal 7 instead of Drupal 8.1

If you understand web development, you would know that Drupal often upgrades its software every two to three years. However, the old versions don’t get much love from Drupal and might be vulnerable to hacking if not properly maintained by developers.

While it isn’t too hard to upgrade from Drupal 7 to Drupal 8, you might need to recode certain parts of the site. This would add-on other costs. In the same way, some developers might put you on the earlier version of OpenCart or Magento, just because they are more familiar with it. But being on an older version usually means a lack of support or worse, a lack of updates.

3) Best Ways To Tank Your Site : Don’t Bother With Schema.org

One thing that surprises me is some sites end up without proper schema. But what is schema? Is it schematic? Unfortunately, schema.org isn’t a schematic drawing but more like an agreed web standard for search engines to understand your site.

In a recent announcement of a newly revamped site by a friend, I found that they were without proper schema, which caused their product pages to not show up accurately on both Google, Facebook and Twitter.

But shouldn’t it still work? Well, it can work, but you’ll lose out on search engines understanding your site. This in turn will affect your search engine results page position. Oh well, it might not be a big deal if it’s a part-time hobby site. But if you need to support a number of staff with your site, perhaps getting your developer to buckle down would be a better idea.

So your host has your backups and you are all set, no? Unfortunately not. Backups are crucial especially with vulnerabilities being found regularly on most sites. Or perhaps a messy piece of code/extension/plugin, might mess up your database.

Imagine years of hard work going down the drain just because you didn’t keep a copy of your site somewhere safe. I had that happening to me before. Somehow our old site got hacked and the host didn’t have a workable copy. Backups are cheap with Amazon Web Services, or if you’re on WordPress, VaultPress, BackupBuddy or ManageWP.

5) Best Ways To Tank Your Site : Not Keeping Up With Standards

It surprises me that many sites are still without proper encryption (http/2). Nor are they responsive to the screen sizes. Unfortunately, these are interpreted as ranking signals to Google, which will affect your SERP when someone searches for your keywords.

With search engines like Google relying on more signals to present the best results to readers, the failure to understand and implement these standards is harmful to your site. Whether you’re just a hobbyist blogger or a major ecommerce store owner, it would be a good idea to keep up with Google’s latest ranking signal.

The path of tanking your site is interestingly, an easy one. Running a site can be full of perils if you do not educate yourself with understanding how the site works, or worse, just relying on a web developer to set it up for you.