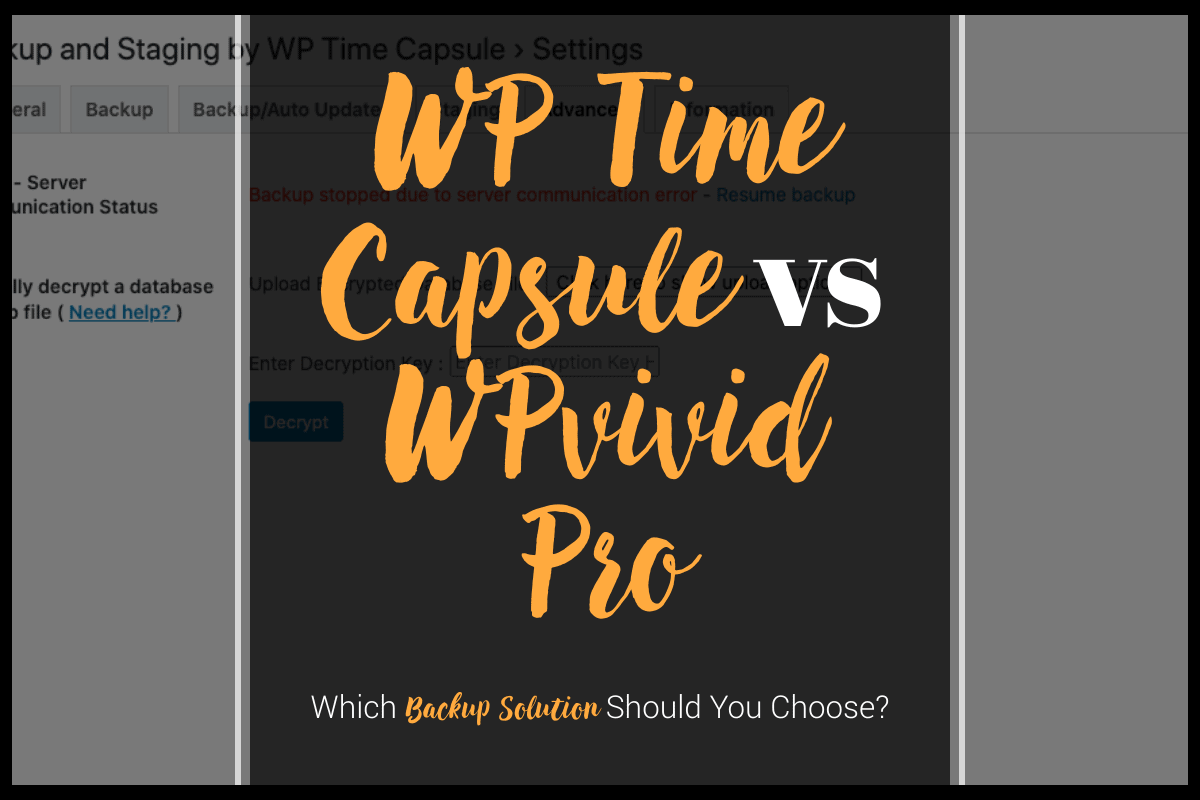 Looking for a comparison between WP Time Capsule and WPvivid Pro? Trying to find an affordable WordPress backup solution for your site? Having used WordPress since since 2008, I’ve gone through various WordPress backup plugins and solutions including BackupBuddy and VaultPress (now known as Jetpack Backup).

WP Time Capsule was first affordable and reliable backup solution for WordPress as the others were either reliable but expensive, or affordable but unreliable due to them using a simpler solution of just compressing the site as backup. This led to failed backups, which often went undetected until its too late.

Though WP Time Capsule Agency Lifetime comes at a hefty $699 one time fee, it is much cheaper than competing cloud backups, such as BlogVault, VaultPress and CodeGuard. Thus, for many years we recommend WP Time Capsule as our Gold standard in WordPress backups for agencies.

Before we get down on the WP Time Capsule vs WPvivid Pro comparison, let us look at the current landscape of WordPress backup solutions. It is broadly divided into three types as below:

How to Choose Between WP Time Capsule and WPvivid Pro?

Now that we have gotten the introduction on WordPress backup plugins and solutions out of the way, let us look at WP Time Capsule vs WPvivid Pro. These two plugins are interesting to digital agency owners because they still offer affordable lifetime licenses for unlimited sites. But which should you get?

Similarities between both plugins

For starters, both plugins are currently available on lifetime license. This means, you pay once and don’t have to pay for renewal as long as the software exists. However, lifetime licenses are usually not sold for long. After awhile or a couple of years, WordPress plugins tend to stop selling the lifetime tier as support costs becomes an issue.

Both plugins also do incremental backups. This is particularly important as incremental backups only records the changes between the last backup and current day. In comparison, regular backups keeps a daily copy of the entire site, which means, you will be taking up a lot more space on your cloud storage.

Differences between both plugins

Firstly, it is cheaper to purchase a WPvivid Pro lifetime license. At $299, it is a whopping $400 lower compared to WP Time Capsule’s license. However, while WP Time Capsule has a dashboard where you can monitor the backups of all your sites, WPvivid Pro does not have that. Not for now at least.

Another difference I noticed is, while both backup solutions do incremental backups, they function in different ways. WP Time Capsule will listen to changes in the database, files and uploads, and will send this changes over to the cloud storage of choice. In comparison, WPvivid Pro will create a zip file to be sent over to the cloud storage. While this results in faster backups, backups on larger sites has a chance to fail.

WP Time Capsule vs WPvivid Pro: Which Backup Plugin Should I Get?

If you manage a lot of sites, I recommend WP Time Capsule. While the initial backup is slow, WP Time Capsule is as reliable as it gets, and comes with a dashboard that you can monitor all your sites. This helps you find sites with backups that has timed out, which you can easily resume by going to the WP Time Capsule settings on your site.

In comparison, with WPvivid Pro, backups are generally reliable and fast. However, as WPvivid does not have a dashboard for you to monitor your sites, you won’t be able to tell if backups fail. And backups will fail on larger sites and shared servers due to timeout.

While it might be an overkill for some, I run both WPvivid Pro and WP Time Capsule for the mission critical sites I manage. Due to WPvivid Pro’s quick compression-based backups, I get WPvivid to create a backup every time I run a site or plugin(s) update.

In comparison, having WP Time Capsule’s dashboard let me monitor the state of backups for the various sites I manage. And at this stage, it is quite a number of sites.

However, if you have the budget for only one backup solution, I recommend WP Time Capsule. Though it is more expensive, it is money well-spent. The WP Time Capsule team has been around for a long time and have a number of products that are profitable in the market including InfiniteWP and HelpNinja.