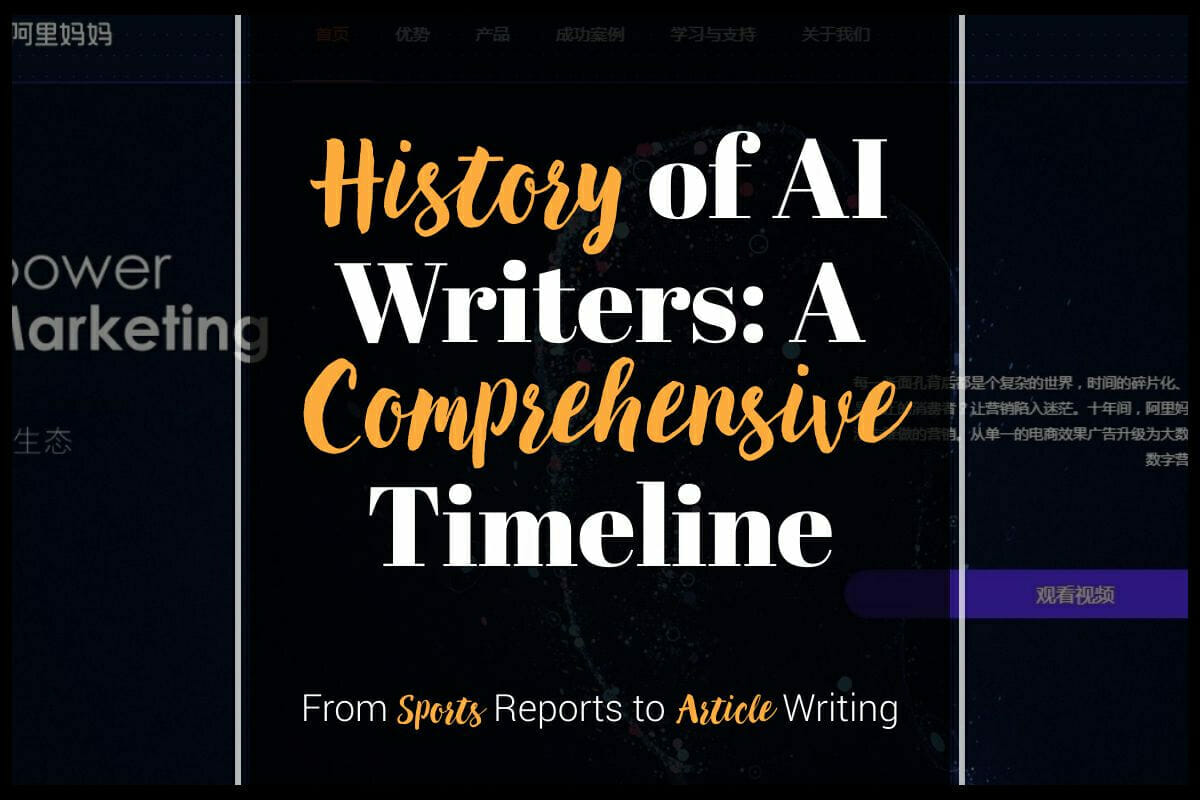 AI Writing Software (or better known as AI Writers, Ai Copywriters or Robo Writers) has matured leaps and bounds over the past few years. We take a look at the timeline of various milestones in the history of AI writers in recent years.

Read: What is an AI Writer and Reasons to Adopt AI Writers in Content Marketing

It is caled, The Policeman’s Beard is Half Constructed. According to Chamberlain’s introduction to the book, RACTER ran on a CP/M machine. It was written in “compiled BASIC on a Z80 micro with 64K of RAM.”

Launching of the company StatSheet in Durham (North Carolina). Its activities covered, initially, sports results. Its founder, Robbie Allen, is graduated from the Massachusetts Institute of Technology.

StatsMonkey was launched, it can automatically write a game recap based only on a particular game’s box score and play-by-play information.

The StatsMonkey project evolved into the start-up Narrative Science in 2010 with Quill, their NLG software, which was developed by Kris Hammond and Larry Birnbaum (Intelligent Information Laboratory), in partnership with the Medill School of Journalism. Among its first customers were Forbes and Fox Group. Enterprises such as Deloitte, Credit Suisse, and Franklin Templeton would then adopt Narrative Science’s Advanced NLG platform, Quill, to transform their data into intelligent narratives.

StatSheet becomes Automated Insights to mark its expansion into content generation for industries outside of sports.

Associated Press announces that the technology developed by Automated Insights will be used to produce corporate earnings stories. “This is about using technology to free journalists to do more journalism and less data processin”, says AP. In 2014, the company’s software produced 1 billion pieces of content.

Automated Insight launches the public-facing version of it’s Wordsmith platform for anyone to use.

The Washington Post launches Heliograph in August 2016 in order to cover the Rio Olympics. Heliograph’s next job will be the coverage of the US presidential elections. By November 2016, Heliograf created more than 500 articles, with little human intervention, that drew more than 500,000 clicks.

Frase, one of the best AI writers, was launched in September 2016, initially as a content optimization software.

Forbes launches Bertie, an AI-powered in-house CMS. What makes it special is that it can learn from and customize its output for different writers. It can recommend article topics to contributors based on their earlier pieces, and also suggest headlines and images that are in sync with the sentiment of their story.

Google published research of a new algorithm that can take webpages and generate “coherent” articles. By creating original content, Google’s new algorithm can answer a user’s question without having to send them to another webpage.

GPT-1 was launched in 2018 by OpenAI. Trained on an enormous BooksCorpus dataset, this generative language model was able to learn large range dependencies and acquire vast knowledge on a diverse corpus of contiguous text and long stretches.

Bidirectional Encoder Representations from Transformers (BERT) is a transformer-based machine learning technique for natural language processing (NLP) pre-training developed by Google. BERT was created and published in 2018 by Jacob Devlin and his colleagues from Google.

OpenAI developed a text generator trained on a data set of eight million web pages that could adapt to the tone and style of a single line of text, creating a full article – even a poem.

May 2020 saw the launch of OpenAI’s GPT-3 (Generative Pre-trained Transformer 3), an autoregressive language model that uses deep learning to produce human-like text. GPT-3 was specifically built to create realistic, convincing text – and it does exactly that. To proof a point, college student Liam Porr used the GPT-3 tool to produce a fake blog post that landed in the No. 1 spot on Hacker News.

2020 – Headline launched. Headlime was one of the two AI writers bought by Jasper

Jasper AI was launched in January 2021, initially as Conversion AI, before being rebranded as Jarvis AI. Jasper announces integration with SurferSEO as part of their partnership. Jasper AI is currently the leading GPT-3 AI Writing Software. ClosersCopy launches on the same month and started introducing their proprietary AI later on.

Frase launches their AI writer in July 2021 which uses their proprietary AI instead of GPT-3.