Do you run an ecommerce store on WordPress? And do you use WooCommerce as your ecommerce plugin of choice? If it is a yes for both, perhaps the best WooCommerce theme for you is the free StoreFront by WooThemes themselves.

The Best WooCommerce Theme: An Introduction

WooCommerce1 has come a long way ever since its launch in 2011. Initially branded as a WordPress only plugin that real ecommerce store owners won’t use, the rise of WordPress saw the meteoric rise of WooCommerce. And with it, the number of WooCommerce themes launched on ThemeForest increased dramatically.

Having bought numerous themes and plugins from both WooThemes and third-party developers, we found that themes made by WooThemes themselves work best with their extensions. Originally it was WooThemes’ Superstore that we used. The Superstore theme was their first ecommerce focused theme, while the rest back then was more for blogging or corporate. 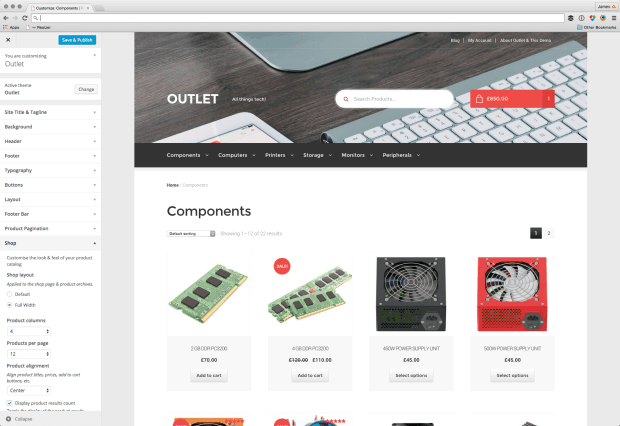 The Best WooCommerce Theme: How about some best selling themes?

While a theme might be a best seller on ThemeForest, it doesn’t mean that it might be good for your online store. These themes might be heavy in terms of loading up a lot of code while loading your site, while not being fully compatible with WooCommerce, you would be better served with official WooCommerce themes by WooThemes (i.e: SuperStore and StoreFront).

Being code heavy means themes like Avada are flexible with multiple headers designs and all, but it also means it takes longer to load while having more potential for conflict with plugins.

If you have the budget, then perhaps commissioning a development agency to custom build a WooCommerce theme for you would be even better, as you get to choose the looks of your site. That might, however, cost you somewhere between USD 15k to 30k to have the site built.

In the same way, when WooCommerce themes are launched, they come with hooks for the extensions to work. Without these hooks, these extensions might just not display nor work the way they are intended to do.

The Best WooCommerce Theme: What can third-party theme developers do?

If you are a WooCommerce theme developer, we recommend ensuring your theme follows the WooCommerce standard and works well with WooCommerce hooks that official extensions are expecting. If the customer suddenly finds the theme not being able to work with his/her favourite extension, they might get upset.

The Best WooCommerce Theme: What can ecommerce store owners do?

Having worked with ecommerce store owners, we say ditch the flashy and ensure your theme developer does a good job instead. With themes like Superstore and Storefront, you won’t go wrong. And extensions for Storefront is relatively affordable compared to hiring a development agency to build your site for you.

While it might not look the most commercial, StoreFront promises 100% compatibility with official WooCommerce extensions. This makes StoreFront our choice as the best WooCommerce theme out there. With some add-ons and a child theme, StoreFront makes your online store look good while costing only a little.